Piping Plovers along the Flyway: New Jersey, the Bahamas, and Beyond 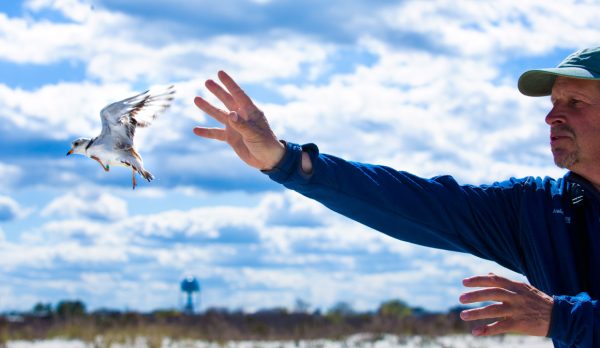 Piping plovers are one of the most intensely managed and monitored bird species in North America, in part due to federal listing of the species under the ESA  in 1986 and subsequent recovery efforts since that time. Much is known about their breeding behavior and population trends as a result of management done on the breeding grounds, however, far less is known about migration and wintering. Recent research, especially in the Bahamas, has revealed new information about their wintering distribution and behavior. Todd will discuss these new findings and an exciting Sister School project that links students along the piping plover flyway.as well as present an overview of breeding and migration work in neighboring New Jersey.

Todd Pover is a Senior Wildlife Biologist for the Conserve Wildlife Foundation of New Jersey. He has worked nearly exclusively with beach nesting birds, with a special focus on piping plovers, since 1994. He has helped oversee recovery efforts in New Jersey over that period and worked on a number of range-wide conservation initiatives. More recently, he has helped conduct surveys, research, and outreach in the Bahamas to further recovery efforts of the species on a full life cycle scale.