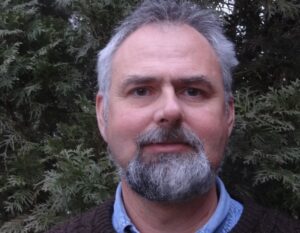 Rick Wright, a native of southeast Nebraska, studied French, German, philosophy, and life sciences at the University of Nebraska, where he worked in the bird collections of the State Museum and served as teaching assistant to Paul Johnsgard. After a detour to Harvard Law School, Rick took the M.A. and Ph.D. in German at Princeton University. His years as an academic included appointments as assistant professor at the University of Illinois, reader-scholar at Princeton University’s Index of Christian Art, and associate professor at Fordham University.

Among Rick’s scholarly publications are two books on the Latin and German animal literature of the late Middle Ages. He is also the author of the American Birding Association’s field guides to birds of New Jersey and of Arizona, and of the Peterson Reference Guide to North American sparrows; his collaboration with the photographer Sanford Sorkin has produced three volumes in the Custom Bird Guides series. He was a department editor at Birding from 2004 to 2008 and the editor of Winging It from 2005 to 2008. Rick is fascinated as much by birders as by birds, and his articles and essays on the history and culture of birding and ornithology have appeared in a wide variety of journals.